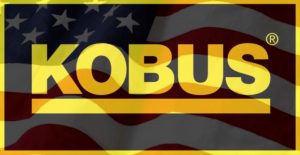 Kobus in America….following the success of the Kobus Pipe Puller in North America over the past couple of years, Kobus Services Ltd has set up a wholly owned US subsidiary, Kobus Inc.  The unique Kobus Pipe Puller, KPP400, which mounts on an excavator, quickly and cost effectively, replaces old gas and water service pipes with new PE or copper pipes in a single operation.  In North America, the Pipe Puller has been effectively used on lead service pipe replacement schemes.  This follows the water quality issues with lead contamination from lead pipes in the aftermath of the Flint water crisis.  It is estimated that there are potentially over 6 million lead service pipes serving properties across America that need replacing, so the Kobus Pipe Puller is going to be busy!

To date, Kobus has sold Pullers to customers in several States, and interest is growing month-by-month.  Contractors in cities across the country are interested in the safety aspects of the Pipe Puller compared to the traditional pulling using a back hoe excavator.  Our first gas customer purchased a machine in the summer of 2019 to replace old gas service pipes, so expect to see more units being used for this application as well as water service pipe replacement.

Kobus Inc is currently finishing the build of its new facility in Kalamazoo, MI.  This location is in the heart of the lead replacement hotspots.  Michigan and surrounding States have a high incidence of lead pipes, especially in poorer inner city areas.  The compact nature of the Puller, and the need for relatively small excavations makes the Puller ideal in these situations.

The new facility will be opening in February, and Kobus Inc will be exhibiting at the ConExpo exhibition in Las Vegas and NASTT No Dig Show in March and April.