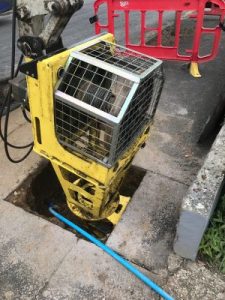 The Integrated 400 Series Pipe Puller, which was originally developed for the replacement of gas services, has been successfully used in trials recently to replace water service pipes.

The 400 series machine is designed to operate from a mini-excavator (2 tonne) and is powered by the auxiliary hydraulics of the excavator itself, compared to the original Modular 300 Series pipe puller which is driven from it’s own hydraulic power pack. Trials were conducted in partnership with Wessex Water who themselves already use the Modular 300 Series Pipe Puller, but were interested to evaluate the potential of the bigger, more powerful machine. Two service pipe replacements were successfully completed on 14m length steel services

Contact Kobus Services for more details on the Integrated 400 Series.

Reducing the risk of ground movement