Gas pipe removal in Netherlands is becoming increasingly significant.  Many contractors have to remove old decommissioned gas service pipes as part of a larger contract.  These removals are done by open cut trenching and often unprofitable for the contractor.  Kobus are therefore delighted to announce that the successful Kobus Pipe Puller has been undertaking trials in various sites in the Netherlands.  The Dutch government announced in 2017 that the goal was for all residential houses to switch to alternative forms of energy and away from gas as part of the Dutch commitment to the Paris Climate agreement.

The Dutch also require that all old decommissioned gas and water pipes are removed from the ground to eliminate environmental waste and minimise underground utility congestion.

As a result, the Pipe Puller makes an ideal tool to remove and/or replace old gas and water service pipes trenchlessly.  Trials were conducted to replace 1-1/2″ steel gas service pipe, and to remove or replace PE pipes up to 20m in length.

The Pipe Puller was successful on all trials demonstrating it is a cost effective alternative to open cut trenching and gas pipe removal in Netherlands no longer needs to be a burden on contractors. 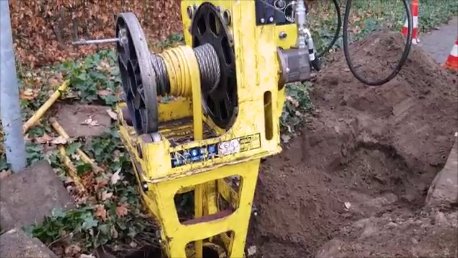