Simon Drain, managing director at Kobus Services, believes that radical changes are needed to the ownership of the UK’s pipe network to solve our leaky infrastructure.

Another hot summer last year and the familiar cold winter snap anticipated.  It seems predictable so why does the water industry struggle to cope with these events? 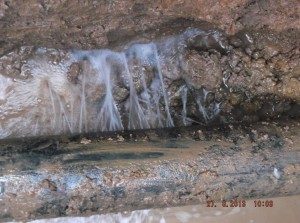 While meteorological data shows that 2018 has seen some of the hottest ever temperatures in the UK, challenging even the drought of 1976, the nagging problem of our aging pipework infrastructure – and what water companies are doing about leakage – persists.

Recent research by the Guardian newspaper* confirms that up to 20% of our water – an increasingly precious commodity – is lost before it even reaches our taps. Even worse, their analysis shows that the amount of water leaks every day has not fallen for at least four years.

Given the fact that many water companies are facing tough leak reduction targets, one might assume the big utility providers are now busily digging up old leaking pipes and replacing them with pristine, leak-proof plastic alternatives. If only the world of subterranean politics was that simple!

While some critics blame a system where it is cheaper to drain a river dry than fix a leak, the other problem facing water companies is one of simple access. For some years now, it has been the case that water pipes on a homeowner’s land are their responsibility to repair – not the water companies.

However, Ofwat measures leakage performance including that on the homeowner’s (private supply) side.  According to the Environment Agency Annual Returns report, it is estimated that as much as 25% of total leakage comes from private supply pipes.  So how can the water companies control leakage and meet their targets when such a level comes from infrastructure they don’t own but are measured on?

This provides the utility sector with a fundamental challenge when trying to replace or repair leaking pipes – which may not be causing the homeowner a problem, but may well still be contributing to significant, chronic leakage.

In practice, this scenario makes it almost impossible for leaking pipes to be replaced, as the homeowner’s only option is to look to their home insurance policy – which often sidesteps the responsibility for infrastructure repairs in the small print of the agreement. Many of the water companies offer schemes to help homeowners, but this is inconsistent across the country.

That is why we’re faced with the ridiculous situation of water companies desperate to replace leaking pipes, but faced with homeowners unable to help them in their laudable quest to get our leaks under control.

The solution to this stalemate lies in a fundamental change of ownership and responsibility. In our experience, utility companies find it hugely frustrating that well-meaning legislation has given homeowners a responsibility they neither want or know they have – until something goes wrong, that is!

Our waterpipe infrastructure should be the responsibility of the industry, not homeowners.

A similar overnight change in ownership of drains and sewerage pipelines was successfully implemented a few years ago, a move already helping the water companies to manage this part of the infrastructure.

1.  Ownership – we think ownership of pipework right up to the point of entry into the property should be transferred to the water companies; this will bring clarity to an area currently beset with confusion

2. Responsibility – we think it should be the role of the water companies to maintain its infrastructure, including the repair of leaking pipes, including the private side supply pipe. This will need to be led by Ofwat and backed by government

3.  Fairness – we think the homeowner deserves protection from unreasonable repair bills; again this will need to be passed into law by government and enforced by the regulator

It may be argued that this proposed change in ownership will increase costs for the water companies, which they in turn will pass onto consumers.

However, any cost will be spread across all households, rather than significantly higher costs falling to those unfortunate homeowners that suffer a leak on their property.  It will also allow better cost efficiencies for the water companies who can target whole areas of high leakage with planned, scheduled activities.

As well as leakage issues, water companies are also posed with the headache of ensuring compliance with drinking water standards at the customer’s tap. Lead supply pipes increase the risk of contamination above the 10μg/l standard.

While water companies attempt to control water quality by replacing lead pipes, there remains the problem of lead pipes on the homeowner side.  Research suggests that disturbing a lead pipe (for example, by replacing only part of it) increases the risk of contamination rather than reducing it.

However, there is technology (from Kobus, among others) that can help water companies meet both lead pipe replacement and leakage requirements. Instead of literally digging up pavements and roads to locate and replace old pipes, new technology allows pipes to be pulled out, via two small excavations, measuring no more than 500mm square.

Utilising a patented pulling cable and kobite bonding compound inside the pipe, our award-winning technology eradicates the need for large scale open cut excavations and expensive reinstatement; methods that take time, manpower and also run the risk of damaging other nearby pipes and cables.

Taking this more innovative approach to pipe replacement has to be part of the overall solution to the challenge of our ageing infrastructure.

Looking ahead, Ofwat has said water companies face financial penalties if leakage targets are missed. The regulator is proposing leakage reduction of at least 15% between 2020 and 2025 and is calling for water companies to embrace new leak detection technologies and innovative ways of upgrading its infrastructure.

The government’s official advisers, the Committee on Climate Change (CCC), warned in 2016 that water shortages were one of the most serious impacts of global warming in the UK, with even modest temperature rises leading to ‘severe’ water shortages in England. The CCC said measures to reduce both leakage and demand are needed.

Evidently, there is an apparent desire from government to tackle the UK’s chronic leakage problem – ideally reducing it to below ten per cent, which has been achieved by Germany. Similarly, the CCC has publicly voiced its support of measures to reduce leakages and over consumption of water.

Clearly, something needs to change to bring about major improvements. While technology exists to enable the easy replacement of buried pipes in urban areas, radical changes to legislation should also be enacted to allow water companies the access they require to do the job properly.